Bologna was by far the most surprising city I visited in Italy. The city is very rich in history and maybe one of its biggest claims to fame is that it holds the oldest university in the world: the University of Bologna, founded in 1088! Now that’s old. When walking through the streets you can feel the medieval atmosphere that all the buildings give off. There is something very mysterious about the place, even though at first glance it doesn’t look like much.

I arrived on September 11th from Venice on a inter-regional train that stopped at every stop and had no air conditioning so it was brutal. But that’s Italy! My host, Davide, picked me up from the station when I arrived.  After being in Venice where there were no cars on the islands, I was a little shocked to see traffic when I arrived in Bologna. Traffic at 8 pm, that’s worse than Toronto. Davide lived about 20 minutes walk from the city centre which was great for my sight seeing. He prepared a traditional food of northern Italy, called piadina. It is a pita style bread that is folded and half and filled with goodies. In this case I had mine with spinach and gorgonzola (the favourite cheese of the north). Gorgonzola is like blue cheese in other parts of the world, but it is softer than what we are used to traditionally.

I noticed that in Italy, the apartments have stone floors, not wood or the fake stuff you find in North America, and all the ceilings are 12 feet high. It really opens up the rooms and brightens the place up. And it is very sound proof, I never heard anything the neighbours were up to, except what was on their TVs; Italians LOVE to listen to their TVs very loud. I have no idea why, and when I asked no one seemed to have an answer. 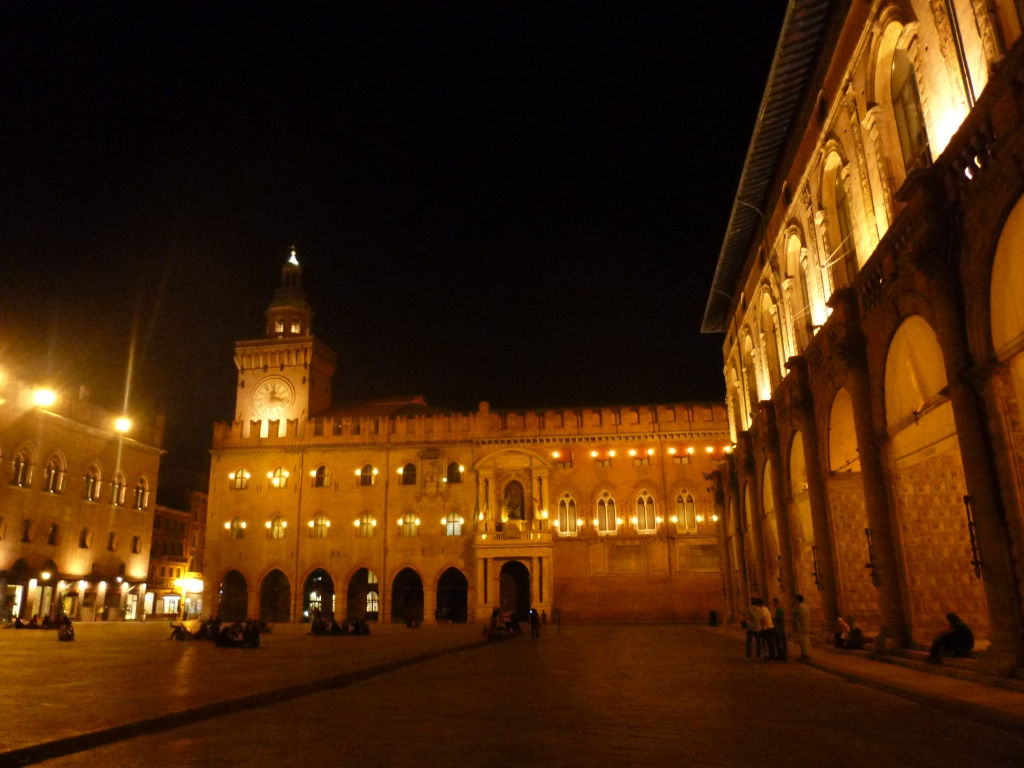 My first view of Bologna was on a night tour with Davide. The city is full of students and so we walked through the streets and I caught a glimpse of how lively the place is when it’s dark. The students fill the bars and cafes, and sit on the streets and play guitar and sing. It was really fantastic, and made me wish that my university experience had been filled with the same zeal.  On one street there were bill boards on the walls completely filled with white paper. These ads contained information about apartments for rent in the city. The students flock here at the beginning of the day to try and find somewhere to stay for the year, and a lot of the time will pay any price.

The students come here to find rental postings for apartments

The next day I walked into Bologna alone and took a look at some of the important buildings and monuments. The city is much quieter than Venice, I don’t think people generally think of visiting Bologna because it doesn’t seem like the most interesting place on paper. A characteristic of the city all the arcades or porticoes that can be found throughout the entire city, and make it very easy to walk outside when it is raining. I happened to get stuck in a rain storm while I was visiting and the porticoes were life saving. And the porticoes will now lead me into the mini history lesson for this city.

Bologna is an extremely old city, dating back to at least 1000 BC and has been occupied by many empires. The city houses the world’s oldest university, that is now at least 1000 years old. It was the first institution to merge the science and the arts faculties. And much of the city is connected by kilometres and kilometres of porticoes, that were used in the past to keep the students’ horses out of the rain. I noticed that the city is actually a very glamorous place, as it is where some of the biggest brands in the world originated. For example, Ducati, Lamborghini, and Maserati all started in this city. 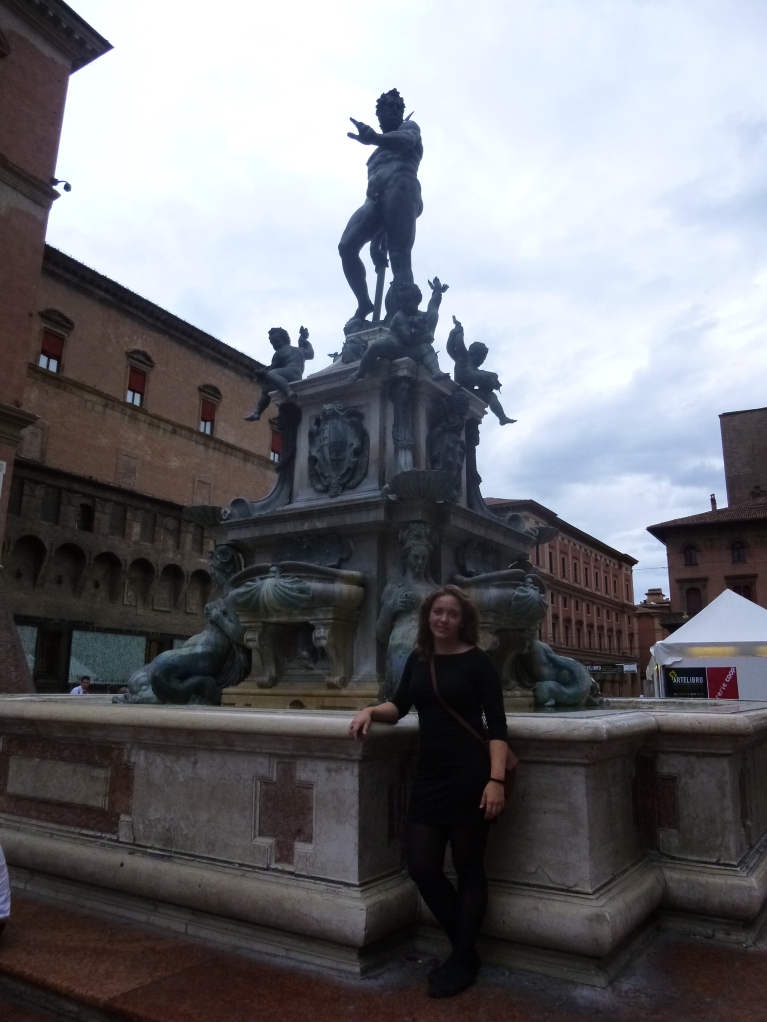 The Fountain of Neptune

My walk from the apartment took me beside Porta San Donato, which was a Roman gate to the city at one point in time. Then I walked along Via Zamboni which leads into the heart of the university community and to Piazza Maggiore in the centre. In the Piazza stands the Basilica di San Petronio and the Palazzo Podesta. The basilica was intended to be larger than San Pietro’s in Rome but it was never completed. If you go see it for yourself you will notice that part of the structure is covered in white stone and the rest is red brick. The Piazza also holds the Fountain of Neptune, which was built in the end by Bandinelli.

One of the characteristics of the city are the Two Towers of Bologna, one of them completed and the other only half built and leaning. These towers were built by aristocratic families in the past to showcase their wealth and power. Those with the highest tower were usually the most powerful families.  The story of these two towers is that the taller was completed by a very wealthy family and then another family wanted to show up the other family so they began construction on the second tower right beside the first. But it was never completed because the foundation of the second tower wasn’t laid down properly and it began to lean. The family decided to stop the construction of the tower and it still remains only partly completed.

My second night in Bologna I spent with a Serbian guy named Nenad who was doing his PhD in Bologna for mechanical engineering. He actually was a fantastic guide even though he wasn’t originally from the city. He showed me this amazing store called Eataly (how clever) that is a bookstore, restaurant, winery, bar, and God knows what else all put into one place. It’s a hit with all the students. There is a very popular concept called “aperativo” which is present in Spain as well but called tapas. You go to a bar and you buy a drink for full price, and then you get a buffet of food. The offer begins at a certain time in the evening and last for a few hours or until the food is all gone. It’s a fantastic option for students who have a budget. 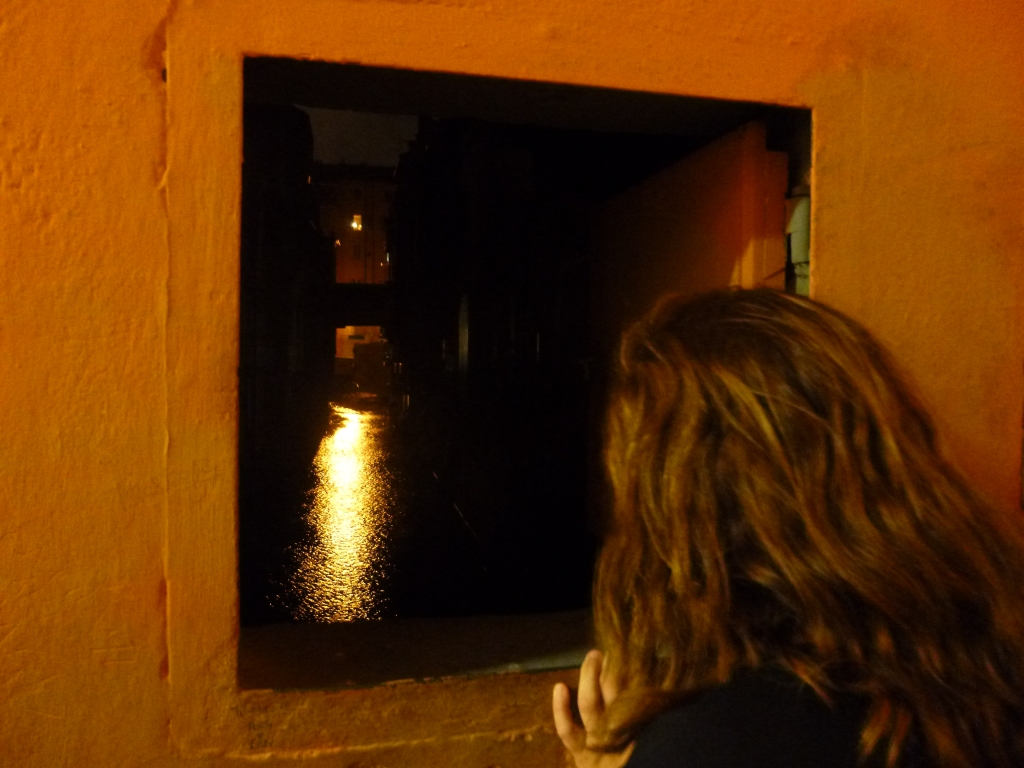 Me looking at Little Venezia through the window in the wall

Nenad also told me about three other secrets of the city which I found very intriguing. One is something called Little Venezia. There is a place in the city where there is a window in the wall. When you open this window you would expect to see the interior of the building that surround it, however when you open the window you actually see a river that runs through the city and then under it. When he showed me I was actually completely shocked and I thought it was so nice to see. The second is a myth about 3 arrows that are scattered in the arcades of the city. The story goes something like this: a man was set to be executed by arrows in one of squares (where the 7 churches are) and a woman came on a horse and showed her bare breasts and the guards shot the arrows in all directions and they landed in the arcades. The prisoner escaped. I found it to be a funny myth and no one knows if it is true. We tried to find the arrows but weren’t successful. The third secret is actually very cool. In Piazza Maggiore, there is a little square with 4 arches connected by 4 pillars. When you go to a corner and a friend goes to the one opposite you, you can hear each other speak if you talk into the corner. But the people standing in the other two corners can’t hear what you’re saying. Apparently it was used by the church for confessions back in the day. I thought it was so cool.

In the end, I really enjoyed my 2 days in Bologna. I was not expecting much from the city and it totally shocked me. It may even be my favourite city in Italy after Rome. I think everyone should go to Bologna and check out some of the things I have mentioned. It will totally surprise and make the experience there a little more personal, even though so many know about the secrets, which doesn’t really make them secrets at all. Despite that, I loved the city and I think you would as well. Go check it out one day.