Next city on my hit list was Florence, Italy and I managed to make a day trip to Siena as well. I arrived by train as usual, because the train network in Italy is fantastic in my opinion. My host in Florence was Alessandro, who actually lives in Sesto Fiorentino which is a suburb of Florence. He met me at the train station like a real gentleman and helped me take my stuff to his apartment. We then headed over to his judo lesson because it is his life. It was interesting to watch considering I have never watched judo in my life, and I learned a little bit of Italian, I think haha.

My hosts and I in Florence

When we returned home he prepared a proper Italian dinner for me and invited some friends to welcome me to Florence. The meal began with 3 different types of meat and 4 types of cheese. The usual Italian fridge is full of this kind of stuff. And you can never have meat and cheese without wine. We tried a wine from Tuscany in the Chianti region, and one from Sicily. Actually Simone and Alessandro are both from Sicily and Nicolletta is from Campania. I preferred the wine from Sicily because the taste is much fuller and there is something spicy about the wine. Next Alessandro served us some pasta with meat and tomato sauce which was fantastic. The food in Italy was so amazing. I am surprised I didn’t gain weight while I was there. The dinner ended with some fruit. I had some peaches and pears and apparently in Sicily the proper way to eat peach is to soak it in your red wine for a while and then eat it. It actually tastes pretty good and is a good balance between the sweetness of the fruit and the bitterness of the wine.

The next day I decided to make a day trip to Siena, which is probably an hour away from Florence by train. Now I got fined on he train for apparently not validating my ticket before getting on the train. So when you buy a ticket that doesn’t have a seat reservation you have to validate the ticket at the station in one of the machines. I didn’t know this so I had to pay 40 euros. Just a warning for those of you who decide to take the trains in Italy, validate the ticket!! 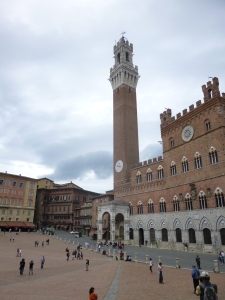 Torre del Mangia and part of the Piazza del Campo

Siena and Florence are actually rival cities and fought wars in the past. It is a medieval city, and looks more medieval than Florence does. I took a bus to the centre from the train station and started my walk into the old city. Siena’s fame and fortune always depended on how Florence was doing in these aspects. During the power of the Government of the Nine in the late 1200s and early 1300s Siena reached its highest point of glory. The city’s most famous structure is the Piazza del Campo. It is a half circular shape that is separated into nine triangles which correspond to the Government of Nine mentioned earlier. In the centre is the Gaia Fountain and at the base of the square is the Palazzo Pubblico. The tower is called Torre del Mangia and is the tallest building in Siena. From what I remember, I think that twice a year there is a horse race in the Piazza that is actually one of the most tourist drawing events in this area of Tuscany. I really enjoyed walking through the cobblestone streets and see the red brick buildings towering over me on each side. I decided that I wanted to walk back to the train station instead of taking the bus there. So I set out on my trek but ended up lost as usual. After some time of aimlessly wandering I stopped at a bus stop only to find that there was a strike going on and that I would have to walk anyway. I missed my train due to being lost and then had to wait an hour for the next train to leave. It was quite an eventful day. Outside of the medieval portion of Siena, there isn’t much to see in my opinion, so spend as much time as possible in the old part of the city if you can. 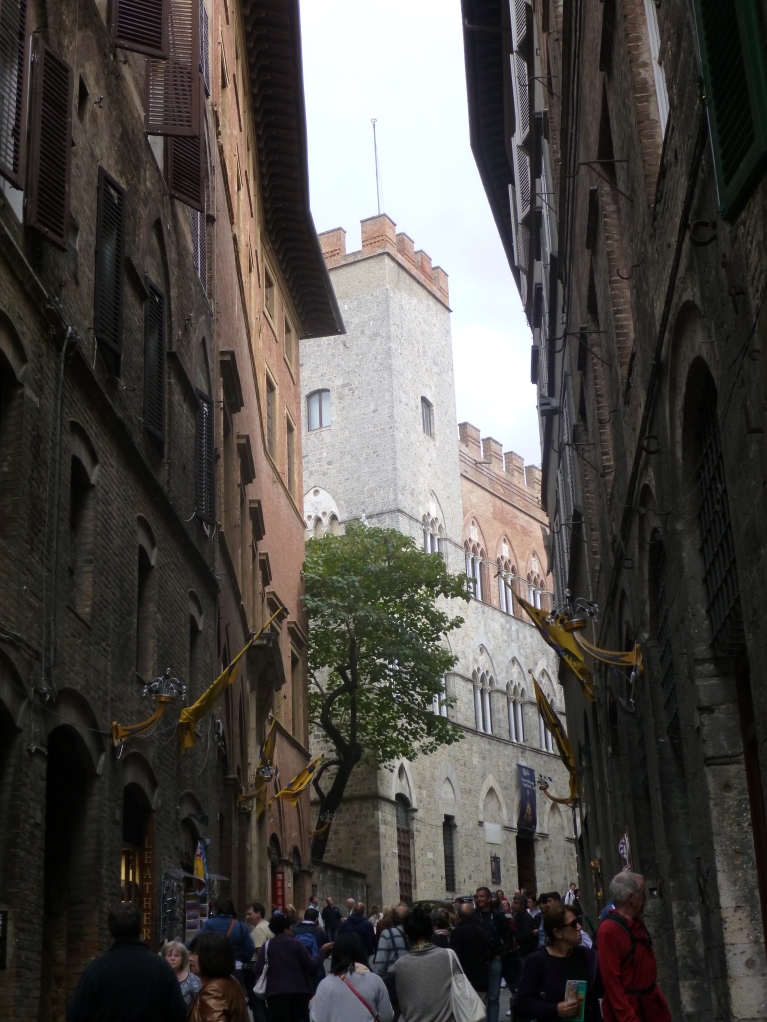 My view walking down a street in Siena

My second full day in Florence I decided to go into the city centre and take a look around at all the beautiful buildings and monuments to be found. Florence is the capital of the region of Tuscany in northern Italy. The Renaissance was born in this city and was ruled by the Medici family that built most of its stunning masterpieces that can be seen today. Lorenzo Medici was the family member who invested the most in the arts and music in Florence and was loved by the entire region for his contributions. 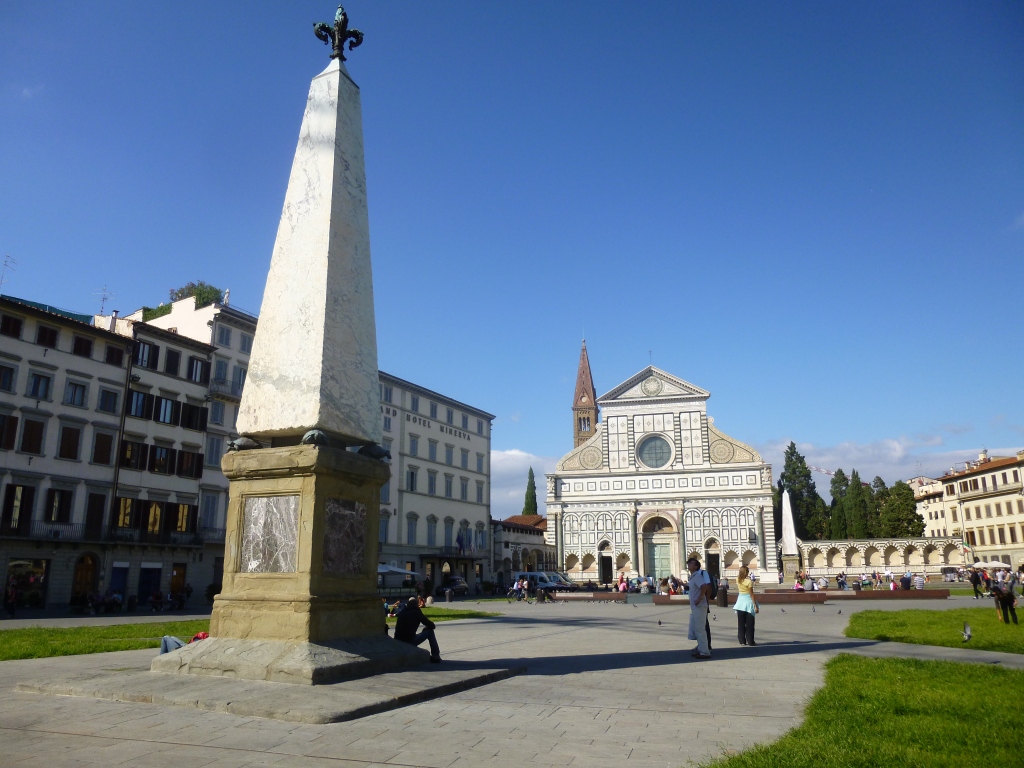 I started near the Santa Maria Novella train station and walked south to see the Basilica di Santa Maria Novella. The square this church is found in is picturesque and is really quite stunning on a sunny day. There are a couple museums to be found in this area as well. Next I walked east toward Basilica di San Lorenzo which is a more simplistic church of brown brick. However it has attached to it a circular building that holds a medical library and can be entered for a small fee. I didn’t choose to go inside due to time constraints but it is open to the public everyday of the week.

I walked southeast from Basilica di San Lorenzo along a street called borgo San Lorenzo and suddenly I came into the Piazza San Giovanni and I stopped short at the sight of the Cattedrale di Santa Maria del Fiore. This church is so far one of the most beautiful buildings I have seen on my trip. When I came into the square and saw it I suddenly had goosebumps all over my body. The sun made the entire structure gleam and the detail in the facade was so pronounced. The image was totally breathtaking. The inside of the cathedral is also very impressive with its high ceilings and sheer size.

Directly south of this cathedral is the Palazzo Vecchio with its awkwardly large tower and the large statues decorating the outside. Two large statues flank the door to the palace and a large fountain sits in the square. The decor seems so misplaced beside the palace. There is a corridor that leads from the south side of the palace across to the Ponte Vecchio, the old bridge, and then to Palazzo Pitti on the other side of the river where the family used to stay in the winter. The stores on Ponte Vecchio are all jewelry shops and has been this way for hundreds of years. 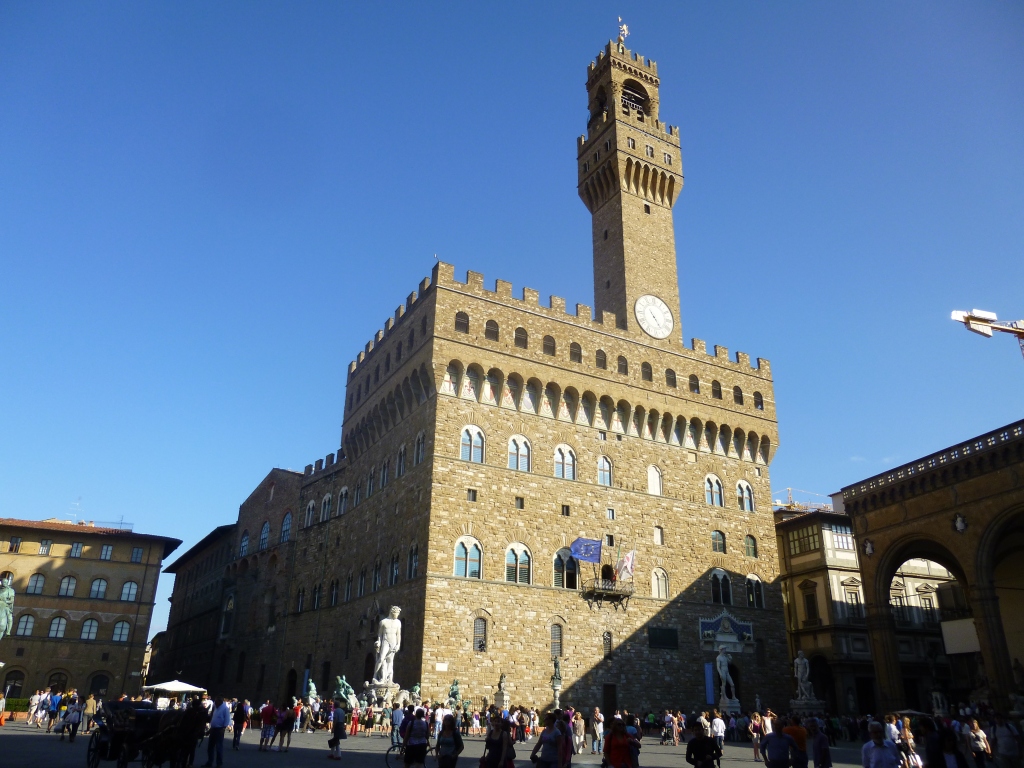 Tuscany has some fantastic food and I couldn’t possibly list them all. The cheese and meat are amazing as I mentioned earlier. I do need to mention one more thing though which absolutely made my day. The hazelnut gelato in the city is to die for. And there is a bread called scchiacciata which is bread sprinkled with olive oil and salt. I died when I ate this with some cheese and meat. Everyone should try it.

Florence was a beautiful city and I would love to go back in the future, to see my new friends, and to see the sights in more detail. The Uffizi Gallery is one of the largest art galleries in the world and I think that it would be wonderful to take a few hours to walk through it. Hopefully one day I will have a blog entry dedicated to my visit there. 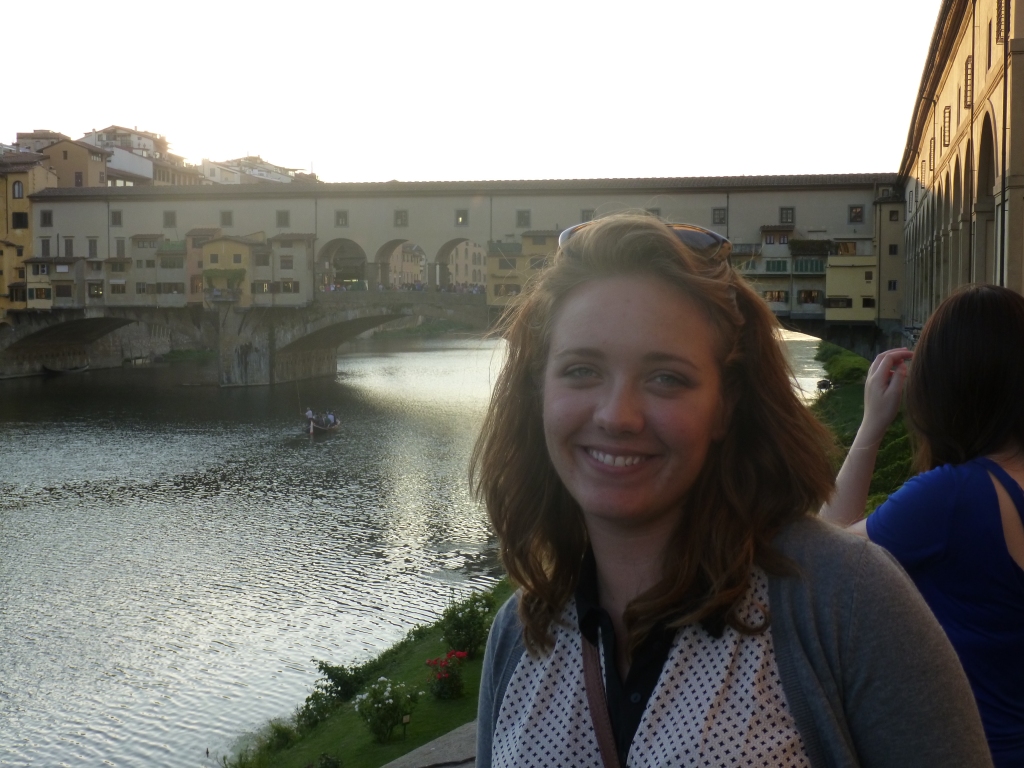 Me with the Ponte Vecchio in the background