Hey again! I arrived in Belgrade, Serbia on August 16th safe and sound. Belgrade, Serbia’s largest city, has a population of about 1.15 million people which has increased in the last few years. I spent a couple nights in the city, staying in Milan’s, one of my cousins, apartment. He decided it would be a good idea to check out Belgrade’s Beerfest, which lasts 5 days and has all kinds of Serbian and ex-Yu bands playing live music until 4 AM. The night started with my purchase of 4L of beer (pivo in Serbian) for the equivalent of $4 CDN. You would never see that kind of price in Canada. So I drank 2L and Milan drank the other 2L and we set off for the festival with some friends. We arrived at Beerfest already tipsy and enjoyed the live music and beer until very early morning. We walked home, got there around 6 AM, and didn’t wake up until 3 PM that day. What a life!

My cousin and I

I spent the Saturday trying to find a plug adaptor, because the “universal” one I bought at The Source wasn’t universal at all. I ended up finding what I needed when I came to Jagodina (a small city south of Belgrade, and where my family lives) in a Chinese dollar store for 80 cents!! It works amazingly, I might pick up a few more and send them home if I can…

So a little more about Jagodina. The name means strawberries. During Tito’s time it used to have a different name but that doesn’t matter anymore in this modern age. It has a population of about 36,000 in the city and is run by a big time politician who has made a huge number of improvements to the place.

I spent a few days here with my family, that includes my Aunt and Uncle (tetka and teča), my cousin Vesna, and my grandmother (baba). They live in a 3 storey house about a 10 minute walk from the city centre. It is quiet, but sometimes the stray dogs barking can get on your nerves. My grandmother lives in a little town just outside of Jagodina called Ribare (which means fishermen). She was probably the happiest to see me of all the people I saw here, but of course grandmothers are usually like that.

The time then came to head to Montenegro with my tetka. We left early morning on August 21st in a bus headed for Budva, Montenegro. Since I am already on vacation, why not take more of a vacation? The route took us through Novi Pazar, not far from the Serbian-Kosovo border, and through Podgorica in Montenegro, past Lake Skadar, and into Budva. We had a couple pit stops along the way, and I must say that the scenery at night is quite eerie when you are in the mountains of Montenegro. All you see are stars, and then mountain peaks against the bluish-black sky, and below just a black abyss where a river flows. The highway winds through the mountains, sometimes making you wonder if you will fall down into the darkness.

Standing in a street in Budva

Budva is the most popular coastal city in Montenegro. It has an Old Town, with cobble stone roads flanked by stone walls. A typical fortress built hundreds of years ago by the Romans and Turks. In the centre is a clock tower and usually a church of some sort, and then a maze of lanes and alley ways to get lost in. 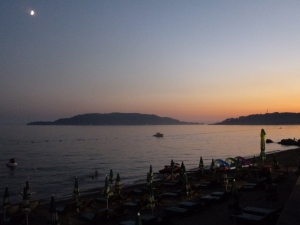 My view from the window

My tetka and I stayed in a  room in Rafailovići, about a 45 minute walk from Budva’s Old Town. Along the water are restaurants, cafes, amusement parks, and clubs. The stretch of beach between Budva and a hill called Zavala is called Slovenska Plaža (beach). East of this hill, you will find Rafailovići and other towns. We found a room for 10 Euros a night per person, with a shared bathroom, which is not bad at all for this time of year. It was situated right on the beach and had a balcony overlooking the water.

Even though I wasn’t in Montenegro for very long I did decide to take a couple trips outside of Budva and see what the country is about. Our first excursion was to Kotor, Montenegro. This city was settled by the Romans in 168 BC but was greatly influenced by the Venetians in the 15th century. The city is flanked by the Bay of Kotor on one side and then by mountains on all remaining sides. Up in the mountains you can see the remnants of old fort walls that were used to keep watch for invaders. Today the city is protected by UNESCO. 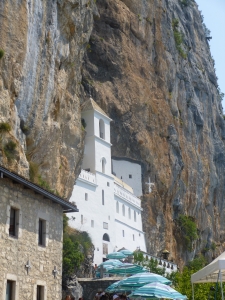 The next trip was the Monastery of Ostrog holding the remains of Saint Basil of Ostrog. It is the most famous pilgrimage site in Montenegro, where people come to offer prayers and have their illnesses cured. We drove up a mountain for kilometres of serpentine roads around the mountains. At some points when I looked out the window, I couldn’t see the road anymore, it was just a very long fall to the bottom. Despite the danger of the road, no one has ever been injured or died on their way up or down the monastery road. It is a monastery built into the mountain of Ostroška Greda. When I asked my tetka, why anyone would ever want to build a monastery in a place so unreachable, she told me that it was the only way to protect our Serbian heritage from the Turkish invaders. I have to admit that when I was in the monastery there is a very eerie and powerful feeling that envelops you. At some points I had tears in my eyes, it is not something I am able to explain. You feel a strong presence when you are there.

My last trip took me across the border to Croatia to see the city of Dubrovnik. It is an absolutely stunning place. It is very similar to Budva and Kotor, because of its ancient roots, but there is something more magical about it. Its ancient Roman name is Ragusa. On a sunny day the sun beats off the walls of this city, and the heat rebounds off the ground making it very hot. Your consolation are the many fountains located around the city with a constant supply of fresh, cold water. I found the place totally enchanting, with the boats swaying in the water in the harbour, and the sheer antiquity of all the structures. This city is also protected by UNESCO, so most of the buildings are unchanged. You have to see it to fully appreciate it.

View of the pier

I absolutely loved my time here in Serbia, Montenegro, and Croatia. And I will be back in December to explore some more of these countries in a different season. I would recommend anyone to visit some of these places, you will be blown away. My next stops are Vienna and Salzburg. We will see each other again soon!