Ah, Rome. There is so much I can say about Rome, but it wouldn’t be enough to capture how beautiful it really is. I am sitting here right now at a loss for words to describe it. I arrived to Roma Termini (the train station) early, which, I must add, almost never happens in Italy. My host’s name in Rome was Giuseppe, and he agreed to meet me at the station to help me with my bags since I was so worried about thieves (maybe a stereotype??). I had my first public transportation experience on a bus on this day, and wow traffic in Rome is horrible. Toronto can’t beat it, so you can only imagine how bad it is. Giuseppe lives southwest of Trastevere, a neighbourhood in Rome, and actually had good access to the centre of the city and was pretty quiet with good neighbours. Actually to be specific, all the neighbours were retired.

So Giuseppe spoke very good English, and he was a fantastic host and guide through the city. My first night there he took me on his scooter to the center to see the Fontana di Trevi because it is nicer at night with all the lights. I have to admit it is very magical at night, but way too many tourists. Apparently it is best to go see it around 2 or 3 in the morning because there is no one there and you can really enjoy the atmosphere. But the fountain really is beautiful, the detail of the entire structure is magnificent. Then we walked around a bit to see the surrounding area such as Piazza Venezia, Piazza del Parlamento, Area Sacra Argentina, and Campo de’ Fiori. I will, of course, give you some background on all of these places. Piazza Venezia is in the centre of the city and is named after Cardinal Venezia and the Palazzo Venezia used to be the embassy of the Republic of Venice back in the day. In this ‘square’ there is a very large, white, colossal building on the top of a hill that has two flames constantly watched by two guards. These flames are always burning and are a tribute to an unknown soldier who died in one of the world wars, I wish I could remember which one now. But it is a symbol in Rome. OK the Piazza del Parlamento I think is self-explanatory. It was built in the 17th century and is now used by the government for their daily activities. The Area Sacra Argentina is actually really cool. It is the remnants of a part of the old Roman city but now has hundreds of cats living in it. There is an organization that feeds and takes care of cats in the monument, and when visiting it you can see the cats sitting around watching you. And lastly, the Campo de’ Fiori is a square lined with cafes and in the centre the statue of a philosopher named Giordano Bruno who insisted to the Church that they should look into science and trust it more than they did. He was burned alive in this square and the statue of him is there to honour him.

Across the street from the Colosseum

The next day I headed toward the Colosseum to grab a ticket to check out the site. Luckily on my way I was approached by a guy working for an agency that specializes in guided tours provided in English. I paid 37€ for a guided tour of the Colosseum, Roman Forum, and the Palatine Hill. I was the only one signed up for the tour so the guide and I headed out to begin, only to be called back 20 minutes later so that I could join a later tour. The owner of the company treated me to a drink for the inconvenience and even offered to hire me because it is so hard to find fluent English speakers in Italy. So any of you who may want to go abroad, Italy is full of opportunities! Thankfully this later tour included the dungeons of the Colosseum, while mine did not, so I got a good deal! The Colosseum was so cool! I was most excited about this part I think because my favourite movie is the Gladiator, I know that is a little lame.

So the Colosseum is fantastic. The sheer size of the building is unimaginable because the structure isn’t complete today. It was built by the Flavian dynasty of emperors in Rome on the sight where Nero’s Domus Aurea used to be. From what I remember in the tour, the theatre can seat around 50,000 people. There is so much history behind it that I really cannot cover it all here so you will need to do some research on your own, but I can tell you for sure that I was totally fascinated by the place. The guide then took us to the Palatine Hill which is just a short walk from the Colosseum. The hill is where the emperors of Rome had their homes overlooking the entire city. The grounds have gorgeous gardens and monuments. A walk through the Palatine grounds leads you to the Roman Forum which is where the daily life of the Romans used to take place. The Via Sacra, the road that the Roman soldiers walked when entering the city after victory, is located here as well as where Julius Casear’s body was burned after he was assassinated. The entire tour was fantastic and I learned a lot from it. Rome is a huge archaeological site waiting to be excavated. 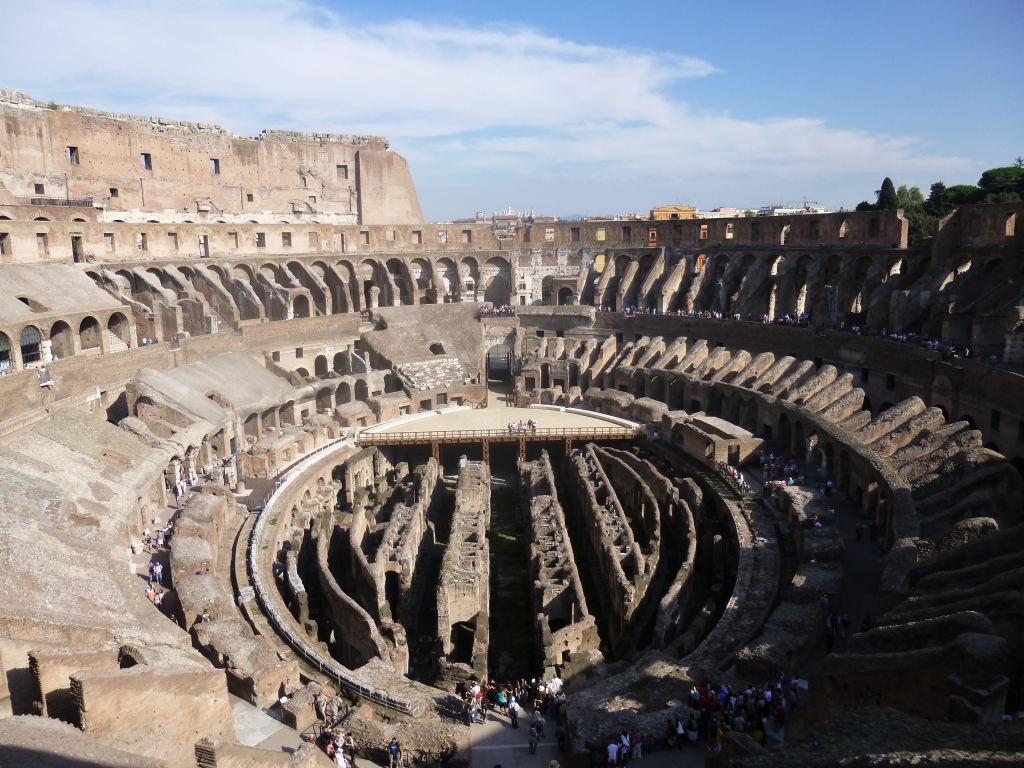 From the top tier of the Colosseum 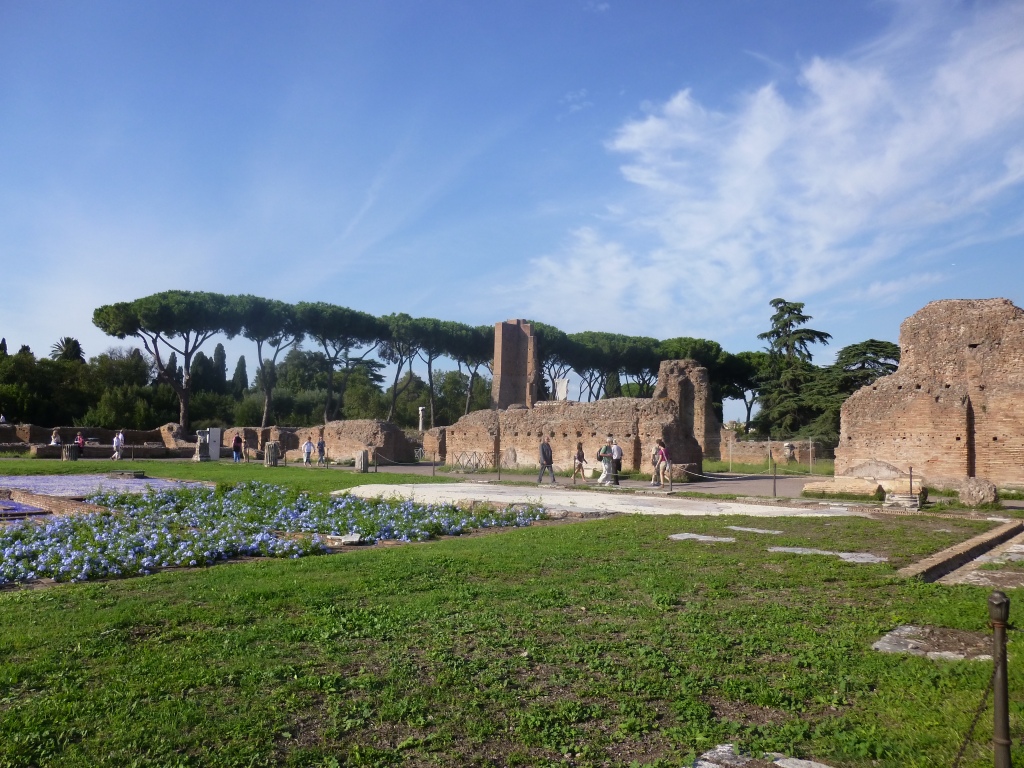 One part of the Palatine Hill

View of the Roman Forum from the Palatine Hill gardens

The next day in Rome was to be spent seeing some of the places I hadn’t yet been to. My first stop was in Vatican City. I arrived there by bus and had to walk along the Vatican wall to get to the entrance to the city. So opinions are very personal obviously, and I have to say that I wasn’t very impressed by the Vatican. I can’t tell you why. Maybe it was the sheer amount of people, or perhaps it is overrated. I wish I knew. So I quickly left and walked east toward the castle of San Angelo. The grounds are beautiful; the castle sits in the centre with a two tiered park around the structure. The castle is connected to the other side of the Tevere river by the Ponte San Angelo, which is flanked by gorgeous statues along its entire length. I then walked up along the river and then to the east to Piazza di Spagna and the Spanish Steps. The climb isn’t horrible and the view is beautiful. The Villa Borghese is just behind this place and the surrounding area is very ritzy, with lots of boutiques and fancy restaurants. I then continued my walk back to Piazza Venezia in the centre. 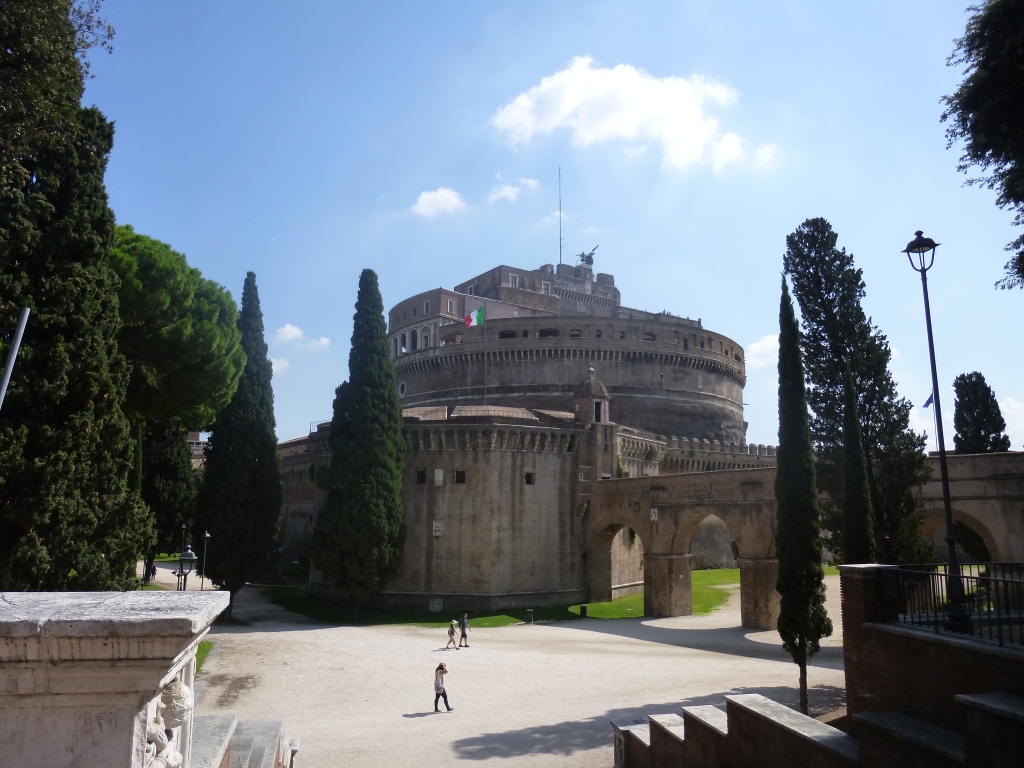 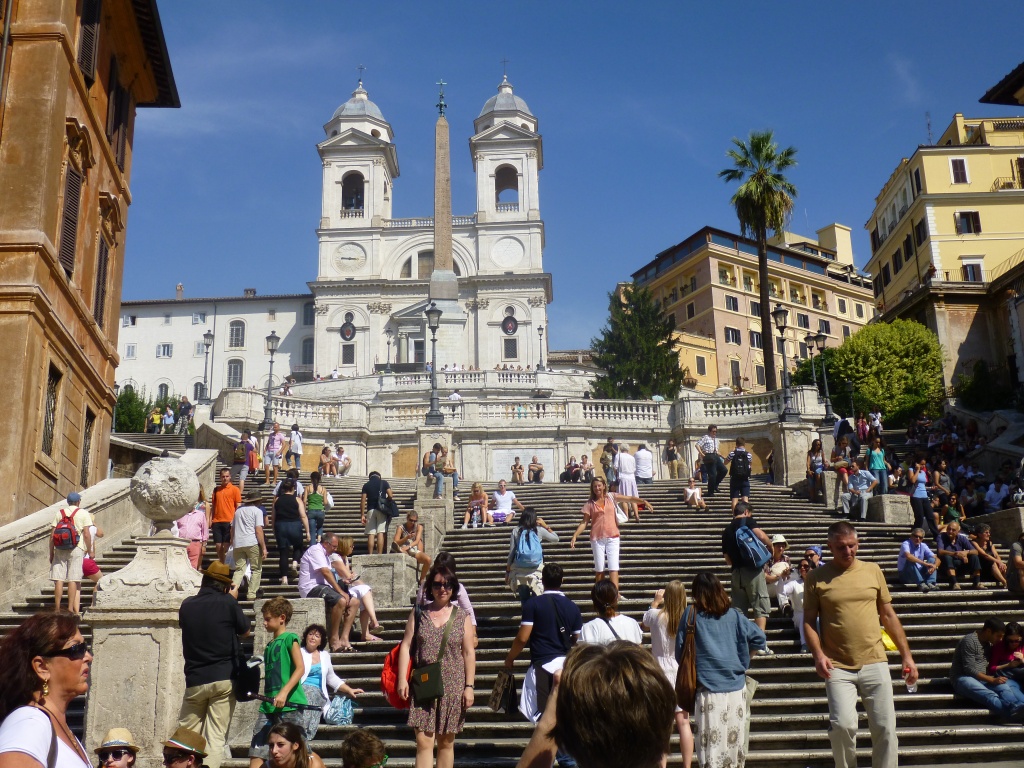 My last night in Rome I went to finally see the Pantheon. This building is huge, I can’t even explain it. Its presence is so overwhelming. The columns are lit and bats fly around the top of the columns. I couldn’t enter at night but apparently in the centre of the ceiling there is hole and when it rains the water is collected in a vase on the floor. This would have been interesting to see, but it didn’t rain in Rome until the day after I left for Salerno. From the Pantheon we took a short walk west to Piazza Navona which I would say is my favourite square in Rome. There is a large fountain in the centre with four men, each representing one of the great rivers of the world. At either end of the square there are two smaller fountains and in the background there is a large church. At night this place is so peaceful and the lighting of the fountains and church add to the mysticism. Then Giuseppe and I headed to Trastevere which is an artsy part of the city where there are a lot of nice wine bars and restaurants to try. I had some grilled lamb which is common to eat in Rome and some fried appetizers that are filled with rice and cheese, or zucchini flower, sort of like an Italian vegetable roll.

Everything in Rome was enjoyable. I will definitely visit it again one day in the future in addition to many other cities.