Madrid is located in the desert of Spain. Barcelona on the eastern coast. And Andalucia lies in the south, hot and full of spirit. This is the part of Spain where bullfighting, flamenco, and Arabic influence can be found. I visited two cities in this region: Granada and Sevilla. Sevilla is the capital of Andalusia, while Granada is home to the Alhambra, one of the most visited places in all of Spain. Travel to the south of Spain can be difficult at times and should be done by either train or bus. I took a train from Barcelona overnight, but ALSA (Spain’s major bus company) offers good prices for travel within Spain and to neighbouring countries. Routes and prices for both modes of transportation can be found at http://www.alsa.es and http://www.renfe.com.

I spent 3 nights in Granada with a guy named Jorge who I met through the CouchSurfing community. He is a law student at the university and fortunately had plenty of time to show me around the city. The only obstacle was the language barrier; I had no choice but to speak in Spanish, which proved to be useful because my Spanish is a bit rusty. Granada is a lovely place. The population is only around 240,000 people making it much smaller than Madrid. This is the city where the Moors built their palace, the Alhambra, and their influence on the architecture can be seen everywhere. The Moors maintained control here for a couple hundred years until they surrended their power in 1492 to Ferdinand II and Isabella I, the same year that Colombus set sail for the Americas and when the Inquisition was at its most powerful point.

Granada at night, view of the Alhambra on the next hill

Granada is located at the foot of the Sierra Nevada mountains meaning that the city is very green and the view is beautiful at some of its highest points. Mirador de San Nicolas is one of these look-out points. From here you can see the Alhambra, Granada’s prized possession, and the surrounding mountain with their snow covered peaks. The sight must be totally wonderful in the winter when they are covered in snow and ready for the ski season. As in most of Spain, tapas is very popular, and maybe even more popular in the south  of Spain. I enjoyed some beer and Arabic inspired tapas at a very small bar entirely decorated in Arabic style. The ambience of the place was fantastic. Many places like this exist in the Arabic quarter of Granada. 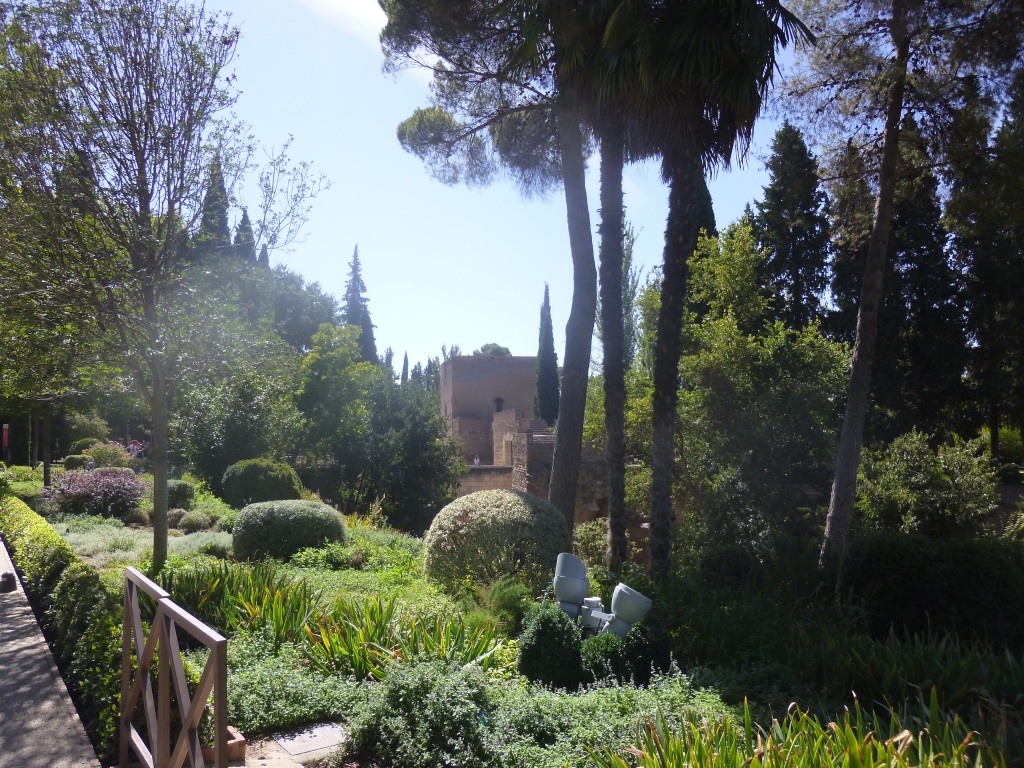 Gardens of the Alhambra

Jorge and I enjoyed a night walk in the gardens surrounding the Alhambra which are open to the public all night. Much of the foliage in the garden is not visible in the dark, but you can hear the water flowing down the  hills. There is something so peaceful about sitting in the dark and listening to the movement of water. Every place I have visited to date that had some sort of body of water has calmed my mind. Visiting the garden at night is very therapeutic for the soul and the mind. Of course I visited the place during the day. The gardens are picture perfect, with green all around and chestnuts on the ground. Roasted chestnuts can be found in kiosks along the road in the city centre. Entrance prices to the Alhambra vary based on which type of tour is in question. I bought the general one, and the cheapest one costing around 8 euros, which allowed me entrance into the Generalife exhibit, and the Alhambra itself. The buildings are beautiful, the small Moorish details in the architecture are breathtaking. The fortress is a massive structure built of brown stone with most of the inner structural walls no longer existent; only a skeleton of the original building is visible. One can only imagine how impressive it must have been when the Moors were at the height of their empire.

Me in the botanical gardens, Alhambra

The night life in Granada is not as big as it would be in larger European cities, but its large student population helps stimulate this a bit. Many international students find their way to this city for work and pleasure, and who could really blame them? It is a beautiful place. Clubs are scattered throughout the city and I happened to go to one called El Cambodio. This club is located on top of one of the hills just west of the Alhambra. It is quite a walk up the hill to get there, I definitely thought my legs would fall off, but maybe I am just out of shape. On Thursday nights women get free cover if they sign up on the guest list through facebook and they get free drinks until 11:30 pm. The place isn’t very big and can get quite full on the weekends. I had a good time but the music was not anything spectacular unfortunately. But the view in the morning is beautiful, for this alone it is worth checking out.

I had my taste of Moorish flavour in Granada and the next stop was Sevilla, about 1.5 hours west by train. Sevilla is the capital of Andalucia and definitely acts like it. The place is full of life and confidence, qualities needed for both flamenco and bull fighting, Seville’s cultural treasures. This time my host’s name was Pablo, a professor at one of the universities in the city, perfect for some stimulating conversations. He showed me a really nice bar with fantastic mojitos on Calle Regina close to Plaza de Encarnacion. It seems that all of Spain has a plentiful supply of good mojitos, best I have ever had.  Alameda de Hercules is another area where you can find a ton of bars and late night tapas, but there are some sketchy people there at night. I am pretty sure there were quite a few drug deals being made in those few minutes I walked through the square. And as I am sure I have mentioned before, Spanish beer is not that great, but in Andalucia you can find Cruz Campo which is better than Estrella so my suggestion would be to order it when possible.

Standing on a bridge over the river, Sevilla

The Guadalaquivir River surrounds Sevilla and unfortunately is not very clean so swimming is not recommended. You should travel 30 minutes to an hour southwest to Juerez de la Frontera or to Cadiz where there are some fantastic beaches. There are ferries that run along the river if you are interested in a different kind of view of the city. The promenade here is also in good shape for walking and cycling with many riverside restaurants and bars to choose from. The cathedral of Sevilla, on Avenida de la Constitucion beside the Reales Alcazares, is probably the liveliest place in the entire city. It was built in the gothic style and looms over everything around it. In all honesty though, the entire area in the southeastern portion of the city is gorgeous. The parks are well taken care of and the fountains are clean. There is no garbage on the streets and there is a special tropical feel to the place. At night you can smell jasmine growing in the gardens, total paradise in my opinion. Days can be spent walking through all the parks here and appreciating all of them. In Parque de Marialuisa stands the Plaza de Espana which people will recognize from one of the scenes in the Star Wars movies. Each province of Spain is depicted with its own mural along the semi circle of wall. In the centre is a large fountain and you can rent peddle boats to kill some time on a warm afternoon. Definitely a must see. 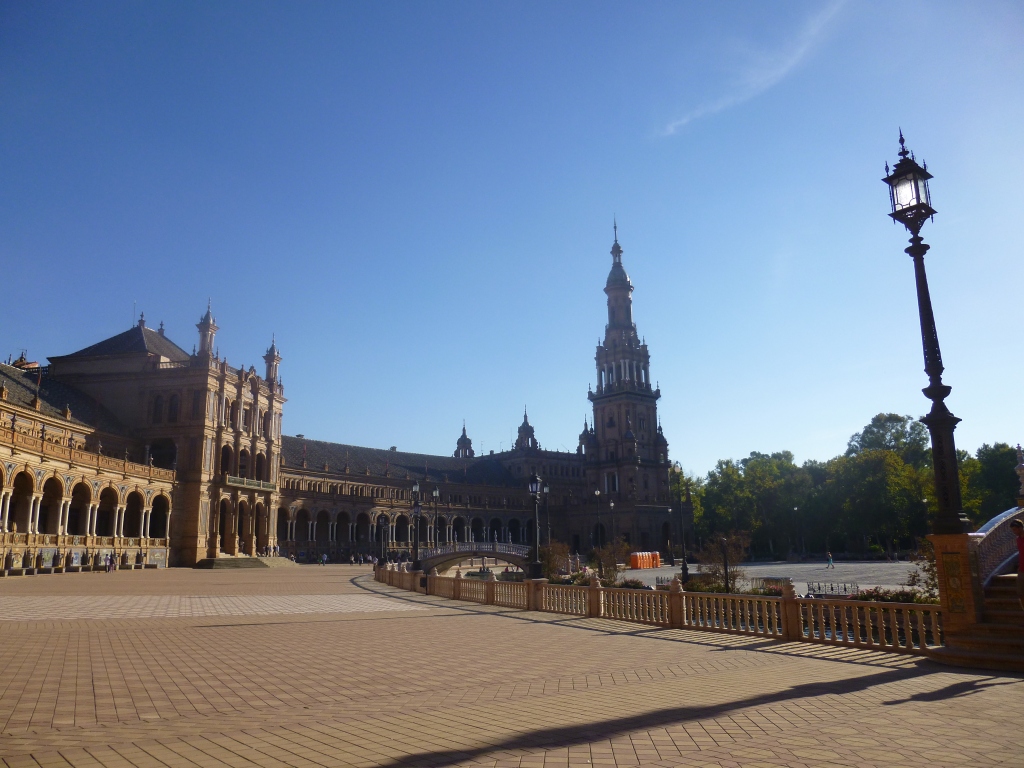 Sevilla is one of Spain’s cultural cores and what better way to see some culture than to go watch a flamenco show? Well that is just what I did. I met with some couch surfers like myself and went to a local show. I had no idea that flamenco included singing; so much imagery associated with the dance including flowing red and black dresses and black heels. The vocalist had such a powerful voice and her emotion could be felt in every note. I was totally blown away by her performance. The dancers were very good as well, but I suppose the singing made a bigger impression on me since it was unexpected. I have never seen a flamenco show in Toronto or in Cuba that included vocals. I did not have the chance to see bullfighting in Sevilla and it actually might be illegal there. Usually following the fight, the bull is killed in the arena, but many people began to see this as a form of animal cruelty. I can see their point in a way. Perhaps it is better I didn’t see bullfighting at its best.

Andalucia is a beautiful region of Spain. There is much more animation to everything in southern Spain such as the food, night life, music, dance, and architecture. The weather is warmer as well making it a fantastic vacation spot, especially with so many cities to choose from. In the future I will probably take a well deserved holiday here along the coast somewhere. Try to find me if you can.