Finally the day came to leave warm southern Europe for the cold and grey parts of northern Europe. I took a discount flight from Porto, Portugal to Eindhoven, Netherlands and then moved directly on to Rotterdam. This is much easier said than done. Well it should have been easy, but it definitely was not. There is a bus from the airport to Eindhoven’s main train station and from there it is possible to catch a train to Rotterdam. However on this particular morning, there was an ‘obstruction’ on the tracks and I had to fight with hundreds of people for a spot on a shuttle bus. I thought the Netherlands would have a much more efficient way to deal with the scenario, but I was very wrong. Finally I got on a bus headed to a station called Tilburg which is the middle of a small town and there is no clear information about which train I am supposed to take to Rotterdam. So I get on a train at random, heading in the direction of the university and get off at the station where most people were leaving; and then I was able to find the connecting train to my destination. 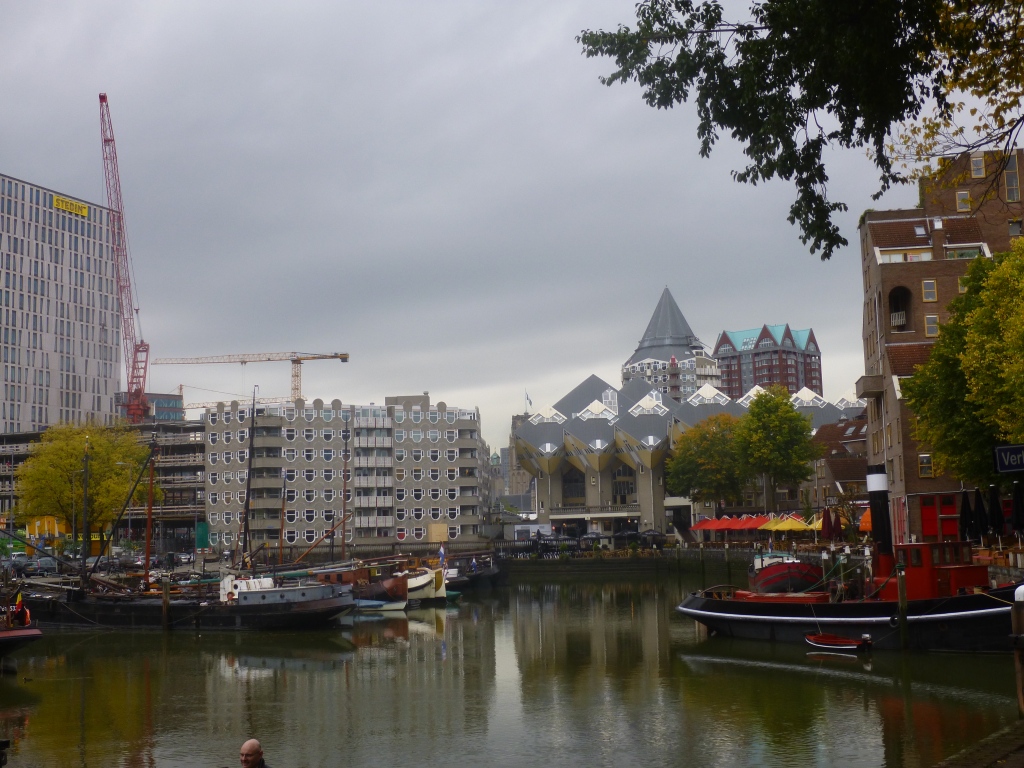 Rotterdam is by no means an old city. It was flattened by the Germans in World War II when the Dutch Army resisted takeover, and then was rebuilt over the last 70 years (1). Therefore most first impressions of the city are mixed. Most people travel thousands of kilometres to visit cities with old architecture and intense history. Rotterdam is missing the historical architecture part, but it does make up for it with its efforts on the modern architecture front. There are some quite extraordinary structural aspects to the city. Rotterdam is also home to the largest port in Europe and one of the largest in the world, and has existed since the 14th century; Shanghai and Singapore hold the first and second place (2). 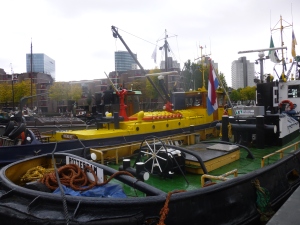 I did spend time walking through the old portion of the harbour that is now used to showcase old boats and ships in the Maritime Museum (3). There is an entrance fee to enter the building and look at the exhibits there but access to the harbour is free. Each vessel has a description beside it including the name and the history behind that particular boat and everything is really well laid out. I had the opportunity to go onto one of the larger transport ships and check out the interior. The living quarters are very cramped for my personal taste, but then again not everyone is made for that sort of lifestyle. I felt fortunate to have had the chance to see what sort of environment some sailors may have enjoyed or suffered with while out at sea. This portion of the harbour though isn’t used for any trade and transport. It would take days to walk through all the corners of the port, it spans about 319 sq. km. It is probable that goods coming to Canada pass through this port and vice versa. It was a very different image of Europe compared to what I encountered in the south.

Amsterdam, the largest city in the Netherlands, is the home to approximately 780,000 people today (4). It is also known as the city of bikes. I almost got run over a few times for sure. Bicycles have the right of way here, then the people, then the cars, so I guess it makes sense to own a bike if you plan on living here. However it is by no means cheap. Rent in the centre can run around 3000,00 €/month. Travel to and from Amsterdam is very effective; I was able to take a train from Delft to Amsterdam Centraal for 12,00 € (5). Luckily I was staying very close to the centre and did not have to rely on other forms of public transportation, but I am sure that transportation services in Amsterdam are first class like most popular European cities. I cannot make any other comments on it though.

Amsterdam is made up of a series of canals covering many kilometres. I cannot count how many bridges I crossed in the few days I was there. I will cover some of the areas I visited and the things I saw. The Red Light District: I always thought this place would be more grungy, but I was mistaken. It is a series of small streets separated by canals lined with windows outlined by red lights and filled with scantily clad girls looking for your money. I definitely didn’t feel unsafe in such a place, and it is very normal to walk through on your way to the centre of the city. But coming from a country where prostitution is illegal it is definitely a reality check to see this part of Amsterdam, and even more surprising is the normality of it. West of Dam Square walking along Raadhuisstraat there are plenty of opportunities to venture down one of the many smaller streets and check out plenty of little shops selling all sorts of goodies; from chocolate to christmas decorations to handmade shoes. The prices however are not so forgiving. If your walk takes you to Westerkerk you can find the Anne Frank Museum nearby. I would highly suggest showing up early because during the busy tourist season the line for admission can reach up to 2 km long! I could not believe it when I heard it.

One morning I took a trip to the flower market, or the Bloemenmarkt. This is in the south part of the city and consists of a medium sized strip of tents and stalls selling all kinds of flowers. Obviously the most popular buy is the famous tulip. The link between Canada and the Netherlands is maintained through this small flower. In 1942 the Canadian government gave refuge to the Dutch Princess Juliana and her daughters. The Dutch sent 100,000 tulips bulbs in return for the favour and has continued to send them every year since then. Today, the Canadian Tulip Festival is one of the largest in the world (6). Amsterdam has a lot to see; there are many art museums to indulge in for those who have an interest or festivals to see during the summer months. I had only a small taste of this great city, a second round is definitely in order.

I ended up in Utrecht for one day during my stay in Amsterdam. An old friend from university contacted me asking me how long I would be in Holland and suggested we meet in this small city; something new for me to see and a different angle of the country. Rotterdam and Amsterdam are much larger than Utrecht, but I think this place was the most beautiful. It helped that for once it stopped raining, but the small, winding, cobblestone roads along with the architecture made for a picture perfect day. There is a gorgeous church here called Domkerk and its tower. The view from the top must be gorgeous, unfortunately I did not climb it. This is a great city to visit if you want some time away from the busy city and some great photos. 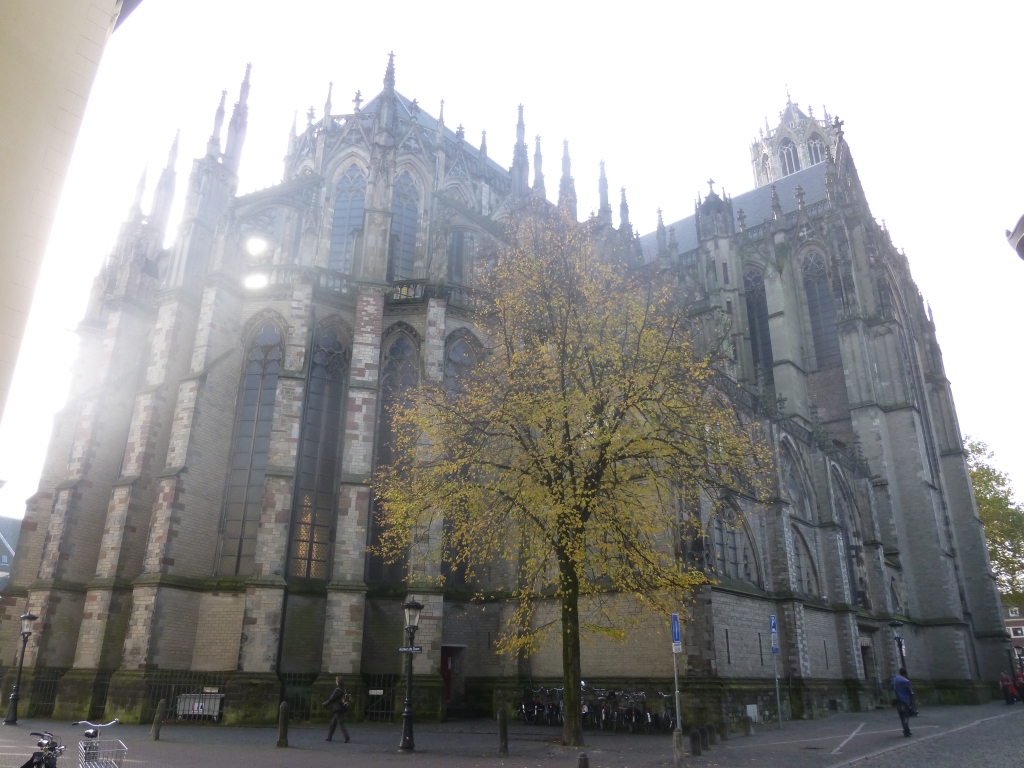 The Netherlands is a very interesting country, considering that a good portion of it was once underwater. The Dutch managed to come up with a system of building dams and then drying the water out to reveal the earth that was once covered and then build on it after a few years. Many parts of Amsterdam and Rotterdam have been built in this way. It is quite an interesting process actually and more information can be found here: http://www.ahaack.net/travel/holland01/holland-travel-report-200105.html. I am not sure how much there is to see in the rest of the country, but Eindhoven and Maastricht are also good destination choices and have good access to Belgium and Luxembourg. If you choose the Netherlands as your next stop, have fun!